Multi-colored snapdragons captured my eye while spending my first afternoon on a coffee shop patio with my journal in over a year (most local patios were closed until recently). Then, to ratchet up the Sunday afternoon vibe, I took the scenic route home to admire a glorious bank of wildflower beauties.
Photos from yesterday on the bosque and Paton dining then today at Battleship Rock in the Jemez Mountains. Loving this time with family! #newmexico #family #vaccinationdone✔️ 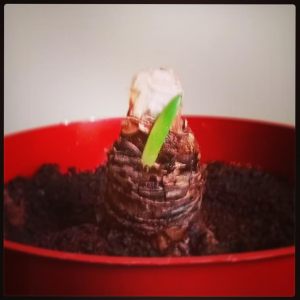 Back in December, a friend gave me an amaryllis bulb. Follow the simple instructions, then…Voila!…in mid-winter you’ll have a beautiful flowering plant to lift up your spirits!

First, I forgot to bring the bulb home from the office. In late January, I finally carried it into my apartment and deposited the box, unopened, on my dining table. It sat there until I was home sick one afternoon in late February. I was ill, depressed and tired of the unremitting grayness that is Iowa in winter. I thought that planting the amaryllis might help me feel more hopeful. And it did, at first. I not only planted and watered the bulb, I spoke to it daily about growing and hope and life.

The papery top of the bulb developed a green tinge, which seemed promising, although I couldn’t discern any actual growth. Over time, though, even that greenish color went away. It seemed unlikely that anything would ever grow. February ended, March passed, April flew by. The lifeless brown bulb just sat on my table, unresponsive for so long that I stopped talking to it, even stopped noticing it as more than just another item on a perpetually cluttered surface.

Except for the days I felt especially discouraged – on those days, I saw it as an emblem of my inability to do anything right.

Lately, I’ve been overwhelmed by the sheer number of things there are to get done in any given day. Mired in these tasks, I am unable to focus on the bigger picture – the one where what I’m doing makes a difference in the world, is about more than just running on an endless hamster wheel. Every time it seems like things are getting on track, that there might be an opportunity to look ahead – maybe even get ahead – things fall apart and I’m buried again.

The sense of failing at my own life overrides other perspectives.

In the middle of such a seemingly hopeless cycle this week, I was frantically searching for one piece of paper among the piles on my kitchen table when I happened to glance at the forgotten amaryllis pot. One tender green shoot has emerged from the bulb’s dry papery skin. Of course, it happened when least expected, when hope of it happening had been surrendered.

“Of course,” I exclaimed aloud, likely startling my neighbor whom I could hear leaving her apartment just then.

Of course – because we won’t always immediately (if ever) see the fruit of our labors.

Of course – because nurturing hope, tending growth, changing hearts, holding space for healing is important work, but accomplished below the surface.

Of course – because our most meaningful work often resides in attending to the drudgery of details.

Of course – because when we take/hold everything too seriously, too personally, too joylessly, too fearfully we forget about grace.

When you’ve forgotten that grace exists, each time it manifests in your life it is a surprise. A miraculous, living, green tendril that reminds you: everything matters.

“…autumn berries hung like clusters of coral beads, as in those fabled orchards where the fruits were jewels . . .” – Charles Dickens

On a photo excursion with Mike this past weekend, I discovered that nature has more lessons to teach me than I realized. This particular day, the lessons were about how we view the world, the filters and perspectives through which we look at our lives or the events that comprise our days. And my teachers? The bright autumn berries that abound in the woods through which our path rambled.

Shortly after hitting the trail at Prairie Park Fishery, both Mike and I noticed luscious red berries. They were lit by the sun and glowing red amid yellow and green flora. I wanted desperately to photograph them, but they were on the wrong side of a chain link fence. So, I attempted to photograph them through the fence. The result? The fence got in the way, giving the berries second billing. 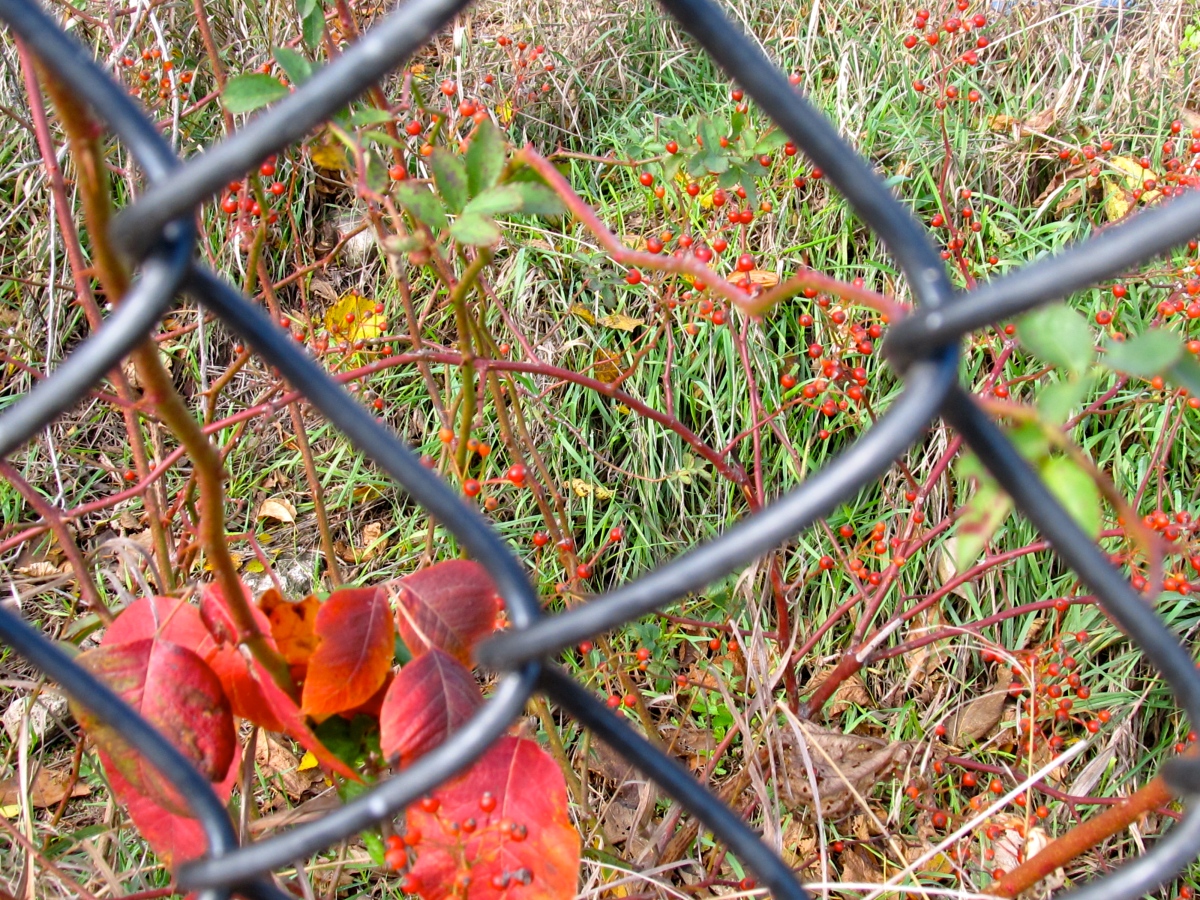 Berry Lesson #1:  In order to see things clearly it is important to clear your field of vision.

Remove or get past extraneous stuff that clutters up your thinking. This is so much easier to say than do, even when taking a simple photo on a Saturday afternoon. But when you are contemplating decisions about big things – your relationships, your livelihood – it is easy to pile nonessential pieces into the picture. Suddenly you’re focusing on something tangential, and you’ve distracted yourself from the central issue. Clear out the psychological and emotional clutter, and your vision will clear as well. Trust me, the end result is worth it. 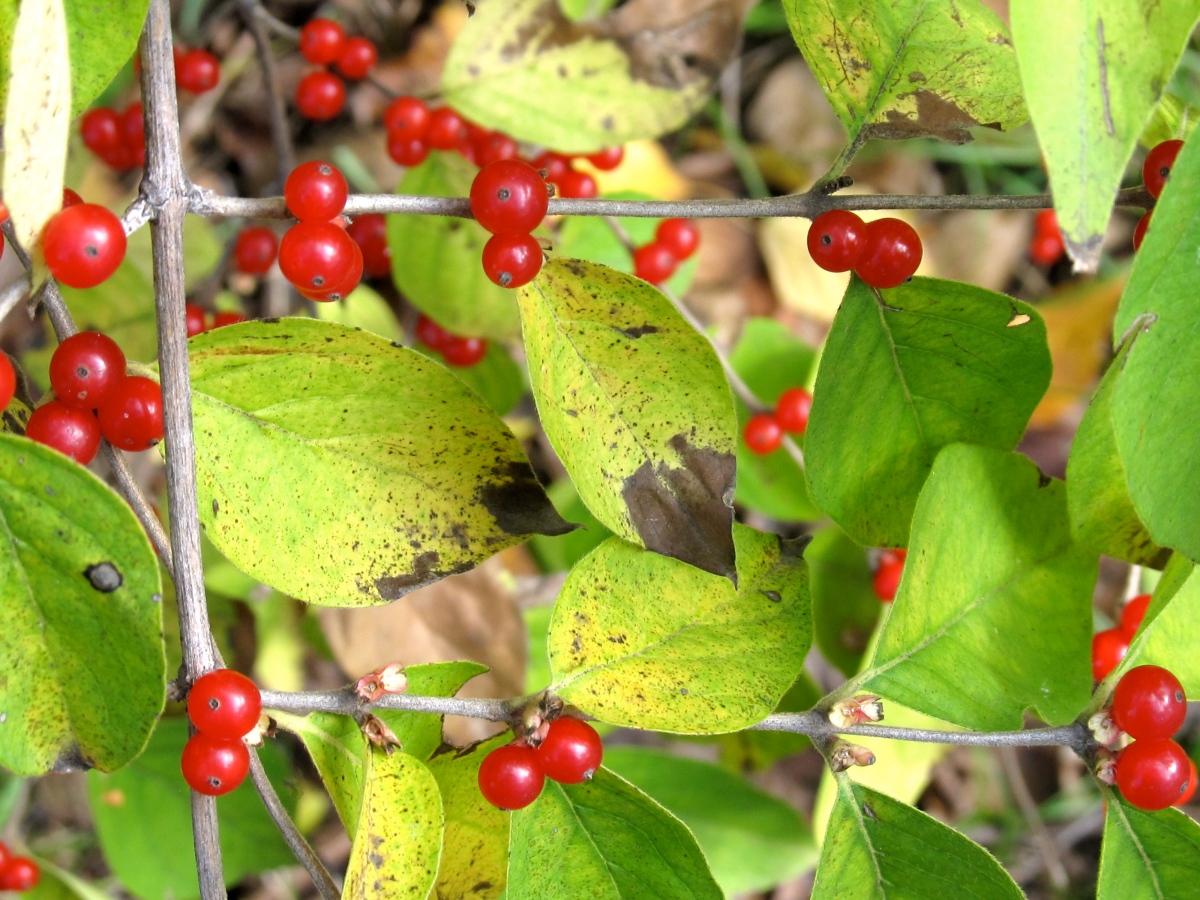 A bit further along on our walk, I noticed a tree with vines curling around its trunk. I loved the look and the texture of the bark, the  symbiosis between tree and vine. So I took a photo… 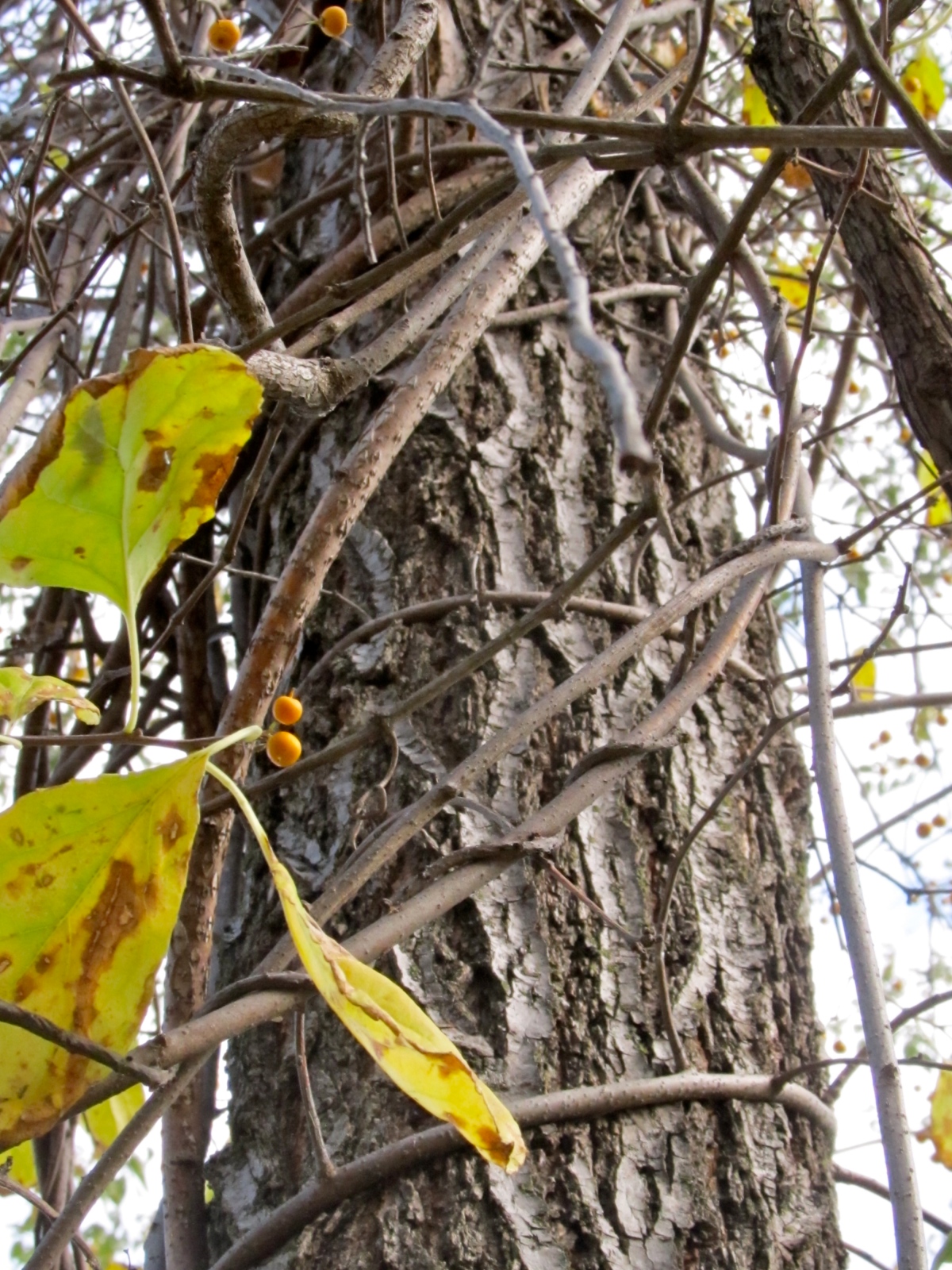 …and continued on my way. Eventually, Mike and I turned around and began to retrace our steps at a leisurely pace. Mike moved ahead when I stopped to get a closer look at something on the ground. When I caught up with him, I noticed Mike was avidly shooting pictures. As I moved up next to him, I saw that he had in his viewfinder a profusion of bright yellow berries which contrasted beautifully against the brilliant blue sky. As I admired his find, I suddenly recognized what I was looking at – the tree I had already photographed. I had been so focused on the textures and the winding vine, I had completely missed the presence of the berries!

Berry Lesson #2:  There IS such a thing as being too focused.

While focus and single-mindedness can be great, we’ve all heard cautionary tales of people who were so focused on achieving a particular goal that they missed out on some beautiful opportunities in their lives. When I was originally photographing the tree, I would have sworn there were no berries in the  vicinity – yet, take another look at the tree photo and you’ll see yellow berries. They are clearly visible to all (except to me as I honed in on the trunk and winding vine).

On our photo excursions, Mike is forever reminding me “Don’t forget to look up!”. It’s a great reminder to change my perspective, to switch up the view from which I am looking at things. Too much focus keeps our eyes locked straight ahead, causing us to miss important things in the periphery.  When I finally did look up, thanks to Mike’s example and exhortation, I saw this: 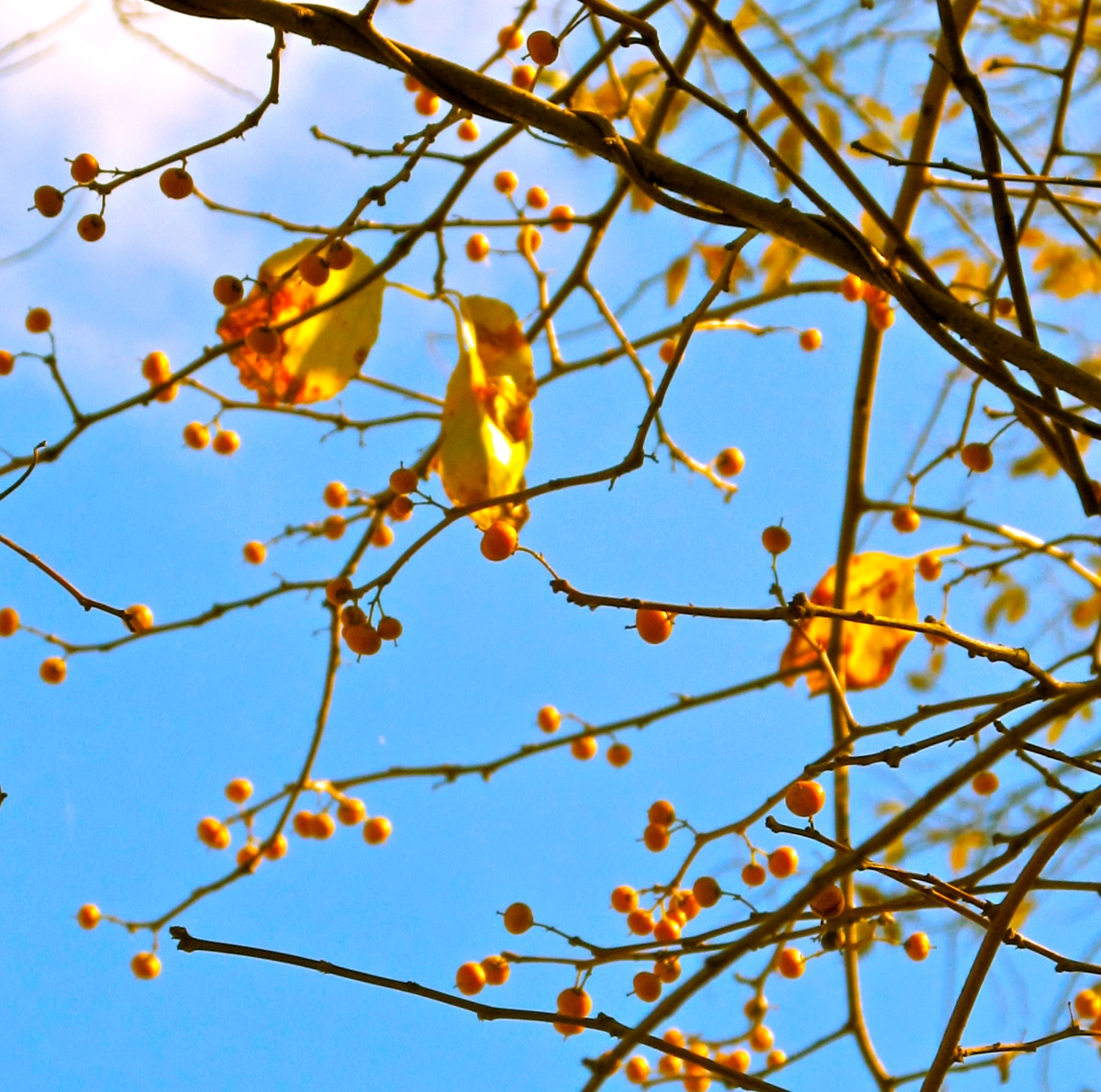 After a while, I began to think I had already snapped photos of every possible view or item on the Fishery trail. Then the low battery light started flashing on my camera, and suddenly I was in a frenzy to grab a last few pictures before the camera shut itself off. This led to some hurried and/or random shots, such as this one: 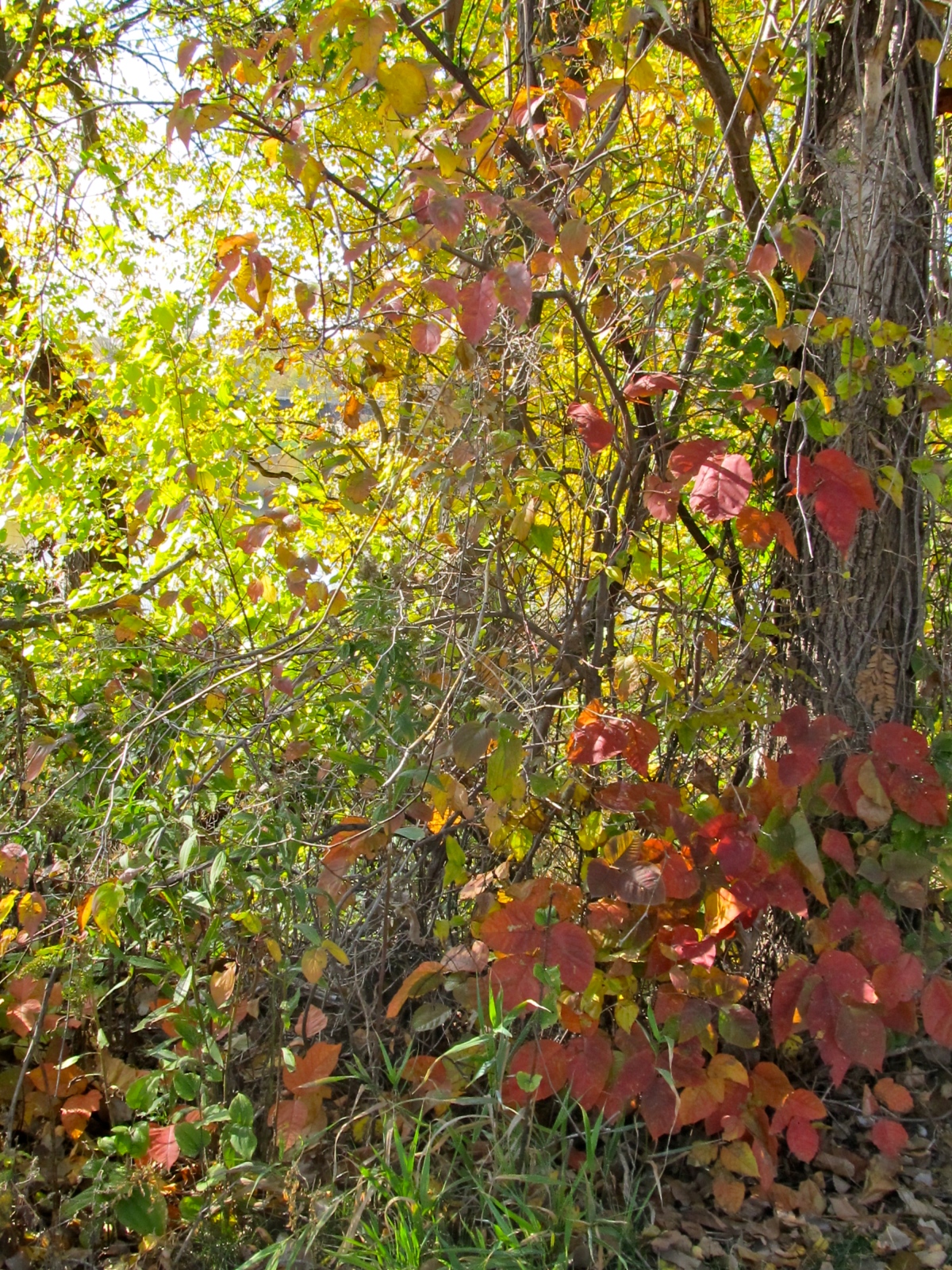 What’s it a picture of? Its just nothing – no interest, no composition, no focal point. When we are in too big a hurry, momentum takes over. Sometimes, momentum carries us forward, sometimes it just keeps us moving. I often think that our culture, obsessed as it is with multitasking and speed and noise, mistakes all this activity for meaningfulness. As I was racing along, hurriedly snapping, I didn’t take one worthwhile shot.

Berry Lesson #3:  In daily life, and photo excursions, you’ve got to slow down and breathe deeply in order for the best things to happen – and to recognize them when they do.

After I snapped the shot above, I looked up to see Mike standing still. His camera, however, was clicking rapidly as he tried to capture a moving target. He said that several blue birds were chasing each other around a particular thicket. I joined him, but I was no match for those little birds – I couldn’t find them with my lens no matter what I did. I trotted back and forth across the trail for a minute, in an unproductive attempt to outrun the winged critters.

Then I stopped, laughing at myself. I let my shoulders relax into the warmth of the sun shining down on them. I smelled the crisp and slightly decaying scent of the leaves piled on the ground. I thought, briefly, “I am happy”. I could see some movement in one tree, so I lifted my camera until I could just barely glimpse something that didn’t look like a leaf. I didn’t care about the end product; I cared about the fact that I was – that second – where and with whom I wanted to be, engaging with my surroundings in a fully conscious manner. And in that moment – CLICK!  – one of the best things happened: 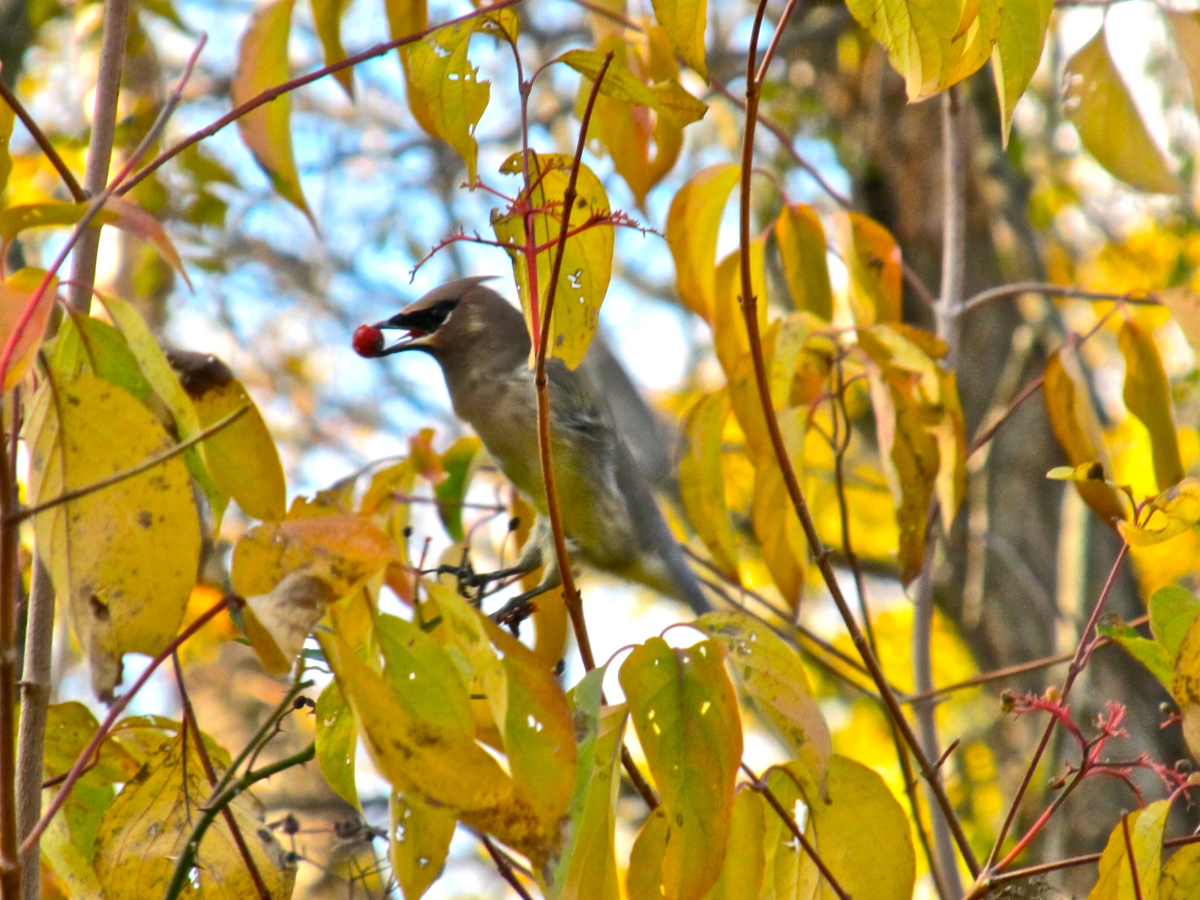