Cloudy days make for peaceful times in the Guest House garden - and for vibrant flower photos!
Multi-colored snapdragons captured my eye while spending my first afternoon on a coffee shop patio with my journal in over a year (most local patios were closed until recently). Then, to ratchet up the Sunday afternoon vibe, I took the scenic route home to admire a glorious bank of wildflower beauties.

“An awake heart is like a sky that pours light.”  –Hafiz 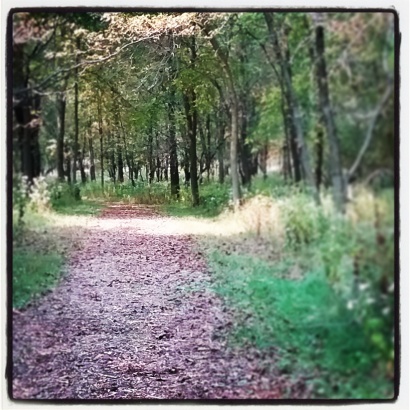 I have this memory from when I was around six years old. It is early summer, and I have awoken very early in the morning. My siblings and my parents are sleeping but the sun, just up, is shining and its warmth is beginning to lift the dew from the grass, forming a hazy ground fog over the yard. I am still in my bed, but the top half of my body is actually wedged onto the window sill, my face pressed against the screen. The yard, the bluff across from the one we live on, the trees I can see on hills across the Mississippi – all of it – is kissed by the sun and beautiful.

I can smell the fresh morning air, with its commingling of flowers in bloom, the river, grass and a darker scent I always associate with air emanating from the old lead mine tunnels bored through the limestone bedrock of my hometown. I hear a door close, keys in a lock, and whistling. My grandfather comes into view, leaving his basement apartment and walking along the narrow sidewalk through our yard, up the cement stairs and to the car park, on his way to work at the meat packing plant. He disappears from my view as suddenly as he appeared. It feels strange that he has no knowledge of my gaze or the love I feel for him.

I stay like this, laying in the window for several minutes. I am aware of my sleeping family in their own beds in the dark interior of the house not knowing that I am awake and watching the world. I am self-contained yet connected to everyone and everything. This feels illicit, somehow – this awareness of a world that is not aware of me.

This luminous memory has remained fresh for fifty years. I’ve thought about why often over the years. Nothing in particular happened. There have certainly been other mornings when I was awake while others slept; many mornings that I enjoyed quiet before the rest of the world got busy and choked the place up with noise. And while it may have been the only time I was awake early enough to watch my grandpa go to his very early shift at the plant, I doubt that is why the experience struck me so deeply.

Perhaps it was the first time I felt connected to everything I was looking at without being the center of it.

I looked up children’s stages of self-awareness and found the following stage-theory, in which a child’s response to a mirror is used to describe each stage:

I was definitely a kid who had a difficult time with that level 5 self-awareness. Being “seen” was excruciating for me. In photos I am often contorting my face in an effort to avoid looking directly at the camera, as if this would somehow make me less visible to the lens.

At the same time, I had a child’s lack of awareness that everything wasn’t about me. If my parents fought, if my sister was cranky, if it rained on the day I wanted a picnic – these all seemed to be about me. And, if I’m honest, there have been many times throughout my adult life I’ve had to shake myself out of this kind of self-referencing. (Just yesterday, a colleague’s demeanor changed dramatically during a meeting and several of us sought her out, afterwards, thinking we must have said something to upset her – she was suffering from a sudden-onset migraine. I guess this is a human tendency, not just mine.)

Back to that long-ago morning, that sense of connection without direct attention (or even awareness) was definitely part of it. There was my grandfather, clearly in a good mood as he whistled off to work. He had no idea I was watching him. He had no idea that, at that very moment, I was feeling love for him. And there was the rest of my sleeping family, to whom I felt connected, also – all with only my awareness. Was this one of the first times I was aware of feeling non-transactional love? Love for my family that was just love – not a response to some behavior or input from them? I don’t doubt I felt it before that moment, but how often was I consciously aware of that love emanating from me?

Then there was the land – the trees, our yard, the hills, the river, the limestone – I was filled with wonder and love for it, too. The sun, the light, all of the beauty in that early morning: had I ever felt such an outpouring of love?

I remember feeling a tingly, buzzy, sensation in my fingers and toes – I was full of some energy I couldn’t name. In fact, there were no words to articulate the experience. This was one of the few times in my childhood that I didn’t follow my mother around the house blabbing every detail of something to her. Later, when everyone was up, I held my tongue. I knew those few minutes of experience had been mine in a way that was deeply personal.

Many years later, I had a discussion/philosophical argument with my brother about chaos theory and the butterfly effect (can a butterfly flapping its wings in New Mexico cause a hurricane in China?) He wasn’t buying it. But I argued that everything was connected. I remember saying, “I believe it. I believe it is all connected – we are all connected.” He suggested that was magical thinking for which there was no “real” evidence  – and I told him I “just knew it”. (Of course, science has proven spooky action from a distance now, so I feel vindicated on the evidence front.) But I was convinced long ago on the level of personal experience – I had felt that connection.

Is that why this one childhood memory has remained so cherished and luminous? Was this the moment I first had the felt, lived, experience that all is connected? I don’t know. All I can say for sure is that even after years of taking this memory out and turning it over and over in my hands, it has never lost its shine – and that’s how I know it is important.

This morning, I woke just as the sun was casting a pink glow over everything. The green trees outside my window were lovely against that pink sky. I felt both gratitude and a sense of well-being, waking up to so much beauty. But it wasn’t an “awakening”.

You can have the other words-chance, luck, coincidence, serendipity. I’ll take grace. I don’t know what it is exactly, but I’ll take it. –Mary Oliver

2 thoughts on “An Awakening”