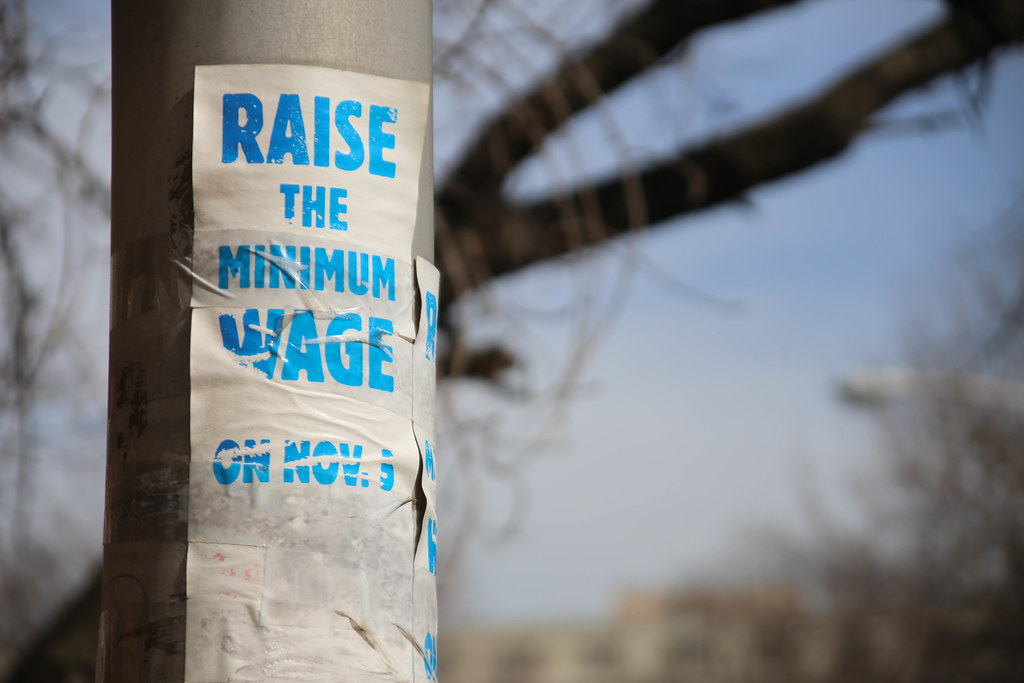 When I moved to Minneapolis in 2013, I went with a good deal of confidence in my professional skills and abilities. I have a masters degree in counseling and student affairs, and I had worked in increasingly responsible positions in higher education administration, crisis response, judicial affairs; I had excellent supervisory experience. I was fairly certain that, even though I was making that move without having already secured my next position, I would find a job that utilized my skills and offered me the opportunity to engage with my community.

There were tons of job for which I was qualified. I applied, I made phone calls, I received assistance and introductions from friends. Nothing materialized. When it became clear that I needed an income even if it wasn’t from an ideal position, I looked for an hourly job that would ease my financial worries while still allowing me the time and energy to continue my job search.

I found a part-time job (which quickly became full-time) at an upscale grocery store, as a barista in their Starbucks kiosk. When I was offered the job, I was told by my new supervisors that they understood where I was in the job search process – both of these managers were also women with excellent backgrounds who had found it difficult to get professional positions. They hired me, primarily, because they had empathy for me – and I was grateful for the opportunity.

I had been poor before, but it had been nearly thirty years since I had truly been poor and not just “cash strapped” periodically. Being poor takes skills, and you lose or forget those skills if you are not called upon to regularly use them. You don’t exactly forget being poor – rather, you forget just how truly wearing it is on your psyche. If you live for very long in the relative luxury of middle class, your experiences become anecdotes of your scrappy past, rather than painful stories of survival. At least, that’s how it was for me.

My fellow baristas were a font of information for me on how to get by, how to recover my skills for living small. First, they found out that I was paying $800 a month for my COBRA insurance, and it was eating up my savings in giant gulps. My coworkers informed me that I likely qualified for county healthcare assistance (this was just as Obamacare was coming into being, and I ventured onto Minnesota’s health care marketplace and discovered that my colleagues were right). I entered the rolls of public assistance for the first time in my life.

Coworkers told me about the best food pantries – where they would go to get actual meat once every two weeks, or fresh produce that was still really edible. I didn’t use these resources, because I could supplement my earnings with some money from savings, and I was suddenly viscerally aware of the very real people working side-by-side with me who were trying to raise families on their $8.00/hour. I didn’t want to take food that a family might need.

I liked my job. But it meant eight hour shifts on my feet and I could never afford shoes that met dress code AND were comfortable on my feet. It meant closing one night and opening the next morning, on way less than eight hours of sleep. It meant working weekends and evenings; never two days in a row off, never a set schedule. I had a hard time adjusting, difficulties juggling my own life needs around the schedule. I missed out on a lot – and, again, I just had me. Many of those I worked with were juggling their families’ needs as well. Working in food service, we were supposed to call in sick if we had any illness that might be communicable. But we had no sick leave, no PTO. If we missed a shift, we didn’t get paid. I began to understand how e-coli spreads in fast food restaurants – diarrhea is not always a good enough reason to miss a fifth of your weekly pay.

The other store employees were unionized, we were not. They received scheduled pay increases, benefits. We did not. It was a very strange dichotomy within one store – everyone assumed that we had the same deal they did. To compound this, customers and coworkers alike kept complimenting us on Starbucks’ “generous” benefits – which we didn’t get because we were store employees, not Starbucks workers. Also, like baristas everywhere, we listened patiently to our customers complaining about their days – wealthy people complaining to struggling ones about the cost of the private schools their children attended, or that insurance didn’t pay for their cosmetic surgery. Many days, I left work feeling the strangest kind of dissonance – grateful to get back to my neighborhood and grab a coffee at The Boiler Room, where the general shabbiness felt welcoming and unpretentious.

I developed some of the skills necessary to survive earning so near the minimum wage: I learned what stores and shops had specials when; I never walked past change lying on the ground; I became a connoisseur of the best cheap toilet paper (and I shopped for it regularly at the BP gas station next door to my apartment). I rode my bike everywhere I could – and I enjoyed it – to save money on gas and vehicle maintenance. I managed when my apartment had no running water or no heat (and when it did have mice) – the rent was affordable and it wasn’t a horrible place to live, in spite of these occasional hardships. I learned to cut my own hair, or to go to Cost Cutter on the days of their $6 specials. I said goodbye to pedicures, to having facial hair waxed, to television, to shopping. I waved a fond farewell to artisanal cheeses, charcuterie boards, movies, theater tickets. I had internet, but only because I lived close to downtown Minneapolis and could use the city’s subsidized service.

What I couldn’t ever get the hang of was trying to live this way and still maintain a sense of self-worth. I know I made choices, and those choices resulted in where I was. But it felt as if other people controlled my outcomes (the people who had no issue, for example, telling me they wanted to hire younger professionals despite the fact that age discrimination in hiring is illegal). And there were systems in place that felt actively hostile to my efforts to make a better life. For example, when I needed assistance to get signed up for health care, it took two days worth of navigating telephone call trees to finally talk to a human being – who informed me that I had the wrong agency. He gave me a number and I started all over on another phone tree. (Folks, I have a masters degree and worked for decades in higher education – if I couldn’t follow the convoluted directions successfully, I submit that it would be difficult for many others to do so!) Another example: the two years I made the least money of my entire adult life were the ONLY two years I owed federal AND state income taxes, to the tune of several hundred dollars. Thinking about the panic and anxiety that induced can still make my pulse race.

Why am I writing about this now? We are in a political season, and things have been ugly. In the process of all the mud-slinging and the intentional lie-telling on both sides of the political fence, I am afraid that many of the real issues that we should be paying attention to, even fighting over or for, are getting lost in the rhetoric.

I was so much better off than people who are truly living in poverty and struggling to make it. I had family and friends who could (and did) offer support in both financial and emotional ways. I had retirement savings that I could, if needed, dip into. I had some excellent, quality goods that I already owned prior to my downturn in fortunes that prevented me needing to find ways to purchase them (a car, a bike, good quality clothes, etc.)

And it still ground me down. The more I learned about how my coworkers struggled, the more I became convinced that change is needed. These people worked full-time jobs – some of them had other part-time gigs as well. Sometimes their children had special needs, and often these needs went unmet or only partially attended to. One minor setback – like a car battery that dies in Minnesota’s polar winter – could sink them into a hole it would take them years to scramble out of. Working their butts off the whole time. God forbid they should break a leg or get cancer and be unable to work.

Now, as I am vetting candidates at the local, state and federal level, I am listening closely to what they say. And I am reading their platforms. And I am asking them questions when I can. I want to know what they think about the minimum wage. I want to know what priority they place on making sure that every working American can feed his or her family. I want to know how they will ensure that people on a fixed income will be able to afford both food and health care. I met a local candidate the other day who said his goal is to eradicate poverty in our county within the next 50 years. That’s a goal I can get behind – but I want to know how he plans to start that ball rolling – I want to know it isn’t just a hook being used to get him elected.

I’ve heard so many arguments that it doesn’t matter who you vote for, because nothing changes. Being poor for a couple of years in mid-life has taught me the lie of that response. Who holds office, who sits at the table when decisions are made, has a very real impact – especially for those who are at the bottom of our social class structures, those who are living in poverty, those who have been disenfranchised in some way. Safely ensconced in my professional, white, middle-class world, I am not as susceptible to the immediate pendulum swings. But the people at the edges feel every slice.

I have kept this piece intentionally personal, and I haven’t argued for one side or the other of the political heads/tails of our two-party system. What I am arguing for is the fact that our votes do make a difference. Being an educated voter, therefore, is crucial. I have always voted, though often I have been a lazy citizen, accepting what candidates have said without looking closely at what they actually mean – what programs and planks and platforms have their votes and ongoing support. Having experienced and compared different cities, counties, and states has taught me that real differences exist on the basis of how these communities have voted. Communities are made up of individuals like you and me.

Please, don’t fall prey to voter apathy and disenchantment; don’t believe the lie that your vote makes no difference. My vote is one drop in a vast ocean, I know. But an ocean’s waves are powerful, and they shape the shoreline. How you vote, how I vote, makes all the difference to people living at the water’s edge.