Grateful for these near-perfect afternoons so late in October. Fall colors aren’t as spectacular, but the warm sunshine is a worthy trade-off.
No matter how old or how long those legs get, she’ll always be my Peanut. Thanks @maltorfer 💕
Sunday afternoon breathing space.

The path to exponential growth always includes – disruption – a letting go and a taking hold.             –from Disrupt Yourself, by Whitney Johnson

The other night I wanted something lighthearted to listen to while doing my dishes. I went online and found a Rolling Stones list of the 20 best comedy podcasts. #14 on the list was a podcast called Risk. The basic premise of Risk: people telling stories they never thought they’d share. It sounded interesting, so I clicked on it.

The first story I heard was told by a man who began with the moment he decided to kill his mother. The second story? A guy who shared a recovered memory of his mother taking him to a rebirthing practitioner. By the third story (a woman whose experience of loss was overwhelming) I was wondering exactly why this had been considered a comedy podcast. The stories were raw and powerful. Yes, they were told with humor, but I wouldn’t call them comedic.

Maybe that’s just me. (Admittedly, it might also have been the episode I listened to.)

The interesting thing is I had been feeling anxious and depressed. The previous night, like many in recent months, I had fallen asleep alright only to waken at 2:00 a.m. and find further sleep impossible. On my way home from work, I had been texting with a friend about how rarely these days I days I feel as if I am inhabiting my own life. She suggested maybe it was time to see a doctor. She wrote, “I didn’t mean medication only! That’s not the only reason to visit a doc. I’m sure they do other doctorly things. Of which I have no clue what.” That made me laugh AND I actually felt it, which is what led me to seek comedy for some relief that evening.

Risk didn’t make me laugh, but listening was therapeutic anyway. First, the stories were masterfully told. Second, while I personally had not experienced any of the events described, my empathy was activated as I felt along with these storytellers – my heart and my intellect, disengaged from my own stuff in order to engage with their sorrows, anger, love. When that occurred, in a strange way it brought me back to my center – it reminded me of who I am and how I came to be in this current place, this exact moment in time. It reminded me that there’s an arc to my own story, and I’m still in the middle of it.

This led me to think more about the idea of risk. The podcast is aptly named, because sharing oneself at that deep level so publicly carries risk, makes one vulnerable in an immediate and visceral way. When I first started writing this blog, I experienced that kind of risk very directly, both in the stories I shared of my own emotional journey and every time I uploaded a photo of myself standing on an easy to read scale. In my experience, others resonate with that kind of story telling. They respond with support and gratitude, because it touches them and, sometimes, speaks for them in ways they don’t feel able to for themselves.

For me, writing the blog, telling my story, became a way of practicing taking risks. I had spent a lifetime being extremely risk-averse, so I definitely needed the practice! But there was still a distance between myself and that risk – I posted the blog entry from the privacy of my cozy little cottage on Elmhurst Drive, then went about my day. I wasn’t face-to-face with that risk – it went out through the ether and I waited for feedback to let me know whether it had been a good risk or not.

What it was leading to, what I was practicing for, was learning to take risks in real life. Big risks that involve my whole self, my daily being in the world – risks where what is on the line is everything. It is often the case that test-runs just aren’t rigorous enough to truly prepare a person. The vulnerability of putting your thoughts and feelings out there is real, but putting your livelihood, your basic needs, your whole heart on the line is risk of an entirely different magnitude.

Only now, two and a half years into choosing to take such risks in my life, am I understanding that the disruption – to my world view, to my self knowledge, to my emotional composure  – that accompanies choosing that order of risk doesn’t settle overnight.

In her new book, Disrupt Yourself, Whitney Johnson talks about the need for disruption in the business climate as a way to spur innovation, both in your business and your career. But there are definitely applications beyond the business world. She writes about the slow beginning of change, but suggests that there will come a tipping-point, when progress happens more quickly:

“Self-disruption will force you up steep foothills of new information, relationships, and systems. The looming mountain may seem insurmountable, but the S-curve helps us understand that if we keep working at it, we can reach that inflection point where our understanding and competence will suddenly shoot upward…”

“…With learning, our progress doesn’t follow a straight line. It is exponential and expands by multiples. Instead of learning a fixed number of facts and figures each day, what we learn is proportional to what we’ve already learned. We needn’t merely plod along, moving one up and one over on the graph of existence…we can explode into our own mastery.” 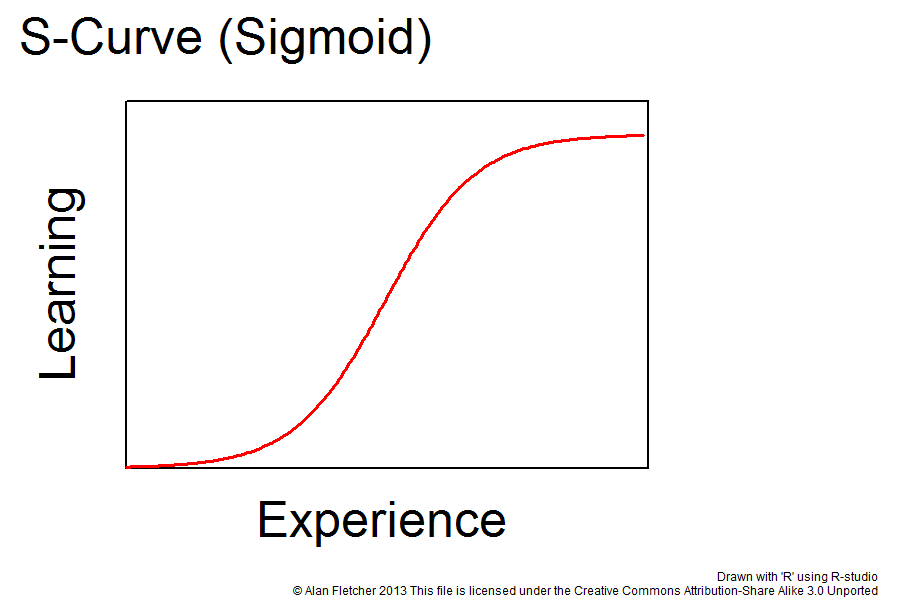 In this sense, risk=disruption. When we take risks, we need to expect disruption. Whether that disruption lasts moments, days, or years it is uncomfortable at best, extremely painful at worst. But it is part of a well-lived life’s trajectory. The storytellers on the Risk podcast clearly exemplified the piece I sometimes lose sight of; namely, that every experience (especially, perhaps, the gut wrenching ones) leads to growth. You can’t see how it works when you are in the midst of it – it is only after you’ve passed through the disruption that you can look back and connect the dots. It is only after you’ve reached the top of the mountain (or the S-curve) that you can truly look back and see how far you came.

Until then, keep your face toward the climb. And if it helps, let someone else’s story remind you that it will all – eventually – be worth it in growth dividends. It will be worth it when you find yourself that much closer to the person you are called to be, to the life you are meant to be living.