Today is our second post in “The Sunday Roast” Series. Cindy Petersen is a May graduate of Mount Mercy University, and her story is truly an inspiring one. Cindy is currently the owner/publisher of Iowa’s newest community newspaper, The Hiawatha Advocate (click here to check it out). The newspaper industry is a struggling one, but Cindy is living her dream right now. If you have a business and/or the financial wherewithal to help support her dream, please check out the advertising and subscriptions page – a full year subscription is a mere $30. Cindy also publishes regularly on her blog, “Write to the Point” if you are interested in reading more of her work! 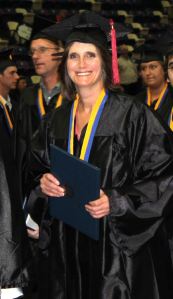 Cynthia Petersen, graduated May 20, 2012 from Mount Mercy University
in Cedar Rapids, IA with a BA in Journalism

Graduating from college at 49 is nothing spectacular. People much older than I have done it. But changing the course of my life is. And that is what I believe I have done.

Some people talk about fate, and destiny, and believe that ”everything happens for a reason.” I, for one, believe that we are the creators of our own destiny and that life is what we make it. But I didn’t always think that way.

I spent years taking life as it came, raising 4 children, and dealing with life’s little tragedies.  But I learned how to remain calm in a crisis, and I became a problem-solver. I learned how to manage my money and how to make ends meet. I was a mediator, a counselor, a housekeeper, a chauffeur, and everything else that a mother does.

Now I realize that I was preparing for something spectacular.

I wanted to be my own boss and so I thought opening a restaurant was the way to go. I spent hours upon hours on the computer researching how to write a business plan, and why a marketing plan was so important. I chose all the plans for my restaurant; what I would name it, where it would be located, who my customers would be, what my menu would entail, how much everything would cost. I did everything I needed to do to make my restaurant a success. But in the end, it came down to a lack of funds.

And though it hurt me to have to give up that particular dream, I can see now that I was still only preparing for something even more spectacular.

As I got on my knees and prayed to God for chance to see my dream come true, I included that if this didn’t work out, I would go back to school and get a degree. (My father had said to me one day after reading an article I wrote, ‘Forget the restaurant, go back to school, become a writer.’)

And the rest is history. I graduated Sunday with a BA in Journalism. But not only did I graduate, I also received the President’s Award from Mount Mercy University’s president, Dr. Christopher Blake, one of the top three awards given to graduating seniors. I was also nominated for two other awards; Who’s Who in American Colleges and Universities, and the Sisters of Mercy Award.

And I’m not done.

Most of you know that I started my own business last year and began publishing a community newspaper in February this year. Every lesson I have ever learned has prepared me to take on this huge undertaking.  But I still couldn’t have done it without going back to college. It was the last piece to my puzzle.

Something spectacular? You bet it is.

But it doesn’t stop there. It has only given me more reasons to find out what else life has in store for me and what I have in store for life.

2 thoughts on “The Sunday Roast: Guest blog by Cindy Petersen”