The first Art Day dawned cold and clear.  I had arrived at Sue’s the previous night (I live in a different city than the others), in order to be there to greet Steph and Paula when they arrived.  Sue’s craft room, the centerpiece of which is an old science lab table that easily seats four working artists, was lit up and the table’s surface clean, expectant.

Once everyone arrived, we sat down and I immediately realized I had no idea what to do.  In fact, the bag of stuff I brought contained none of the supplies necessary for a coherent project. Besides, what kind of coherent project was I interested or skilled enough to make?  I have, since the 90s, dabbled in beads and bead applique. But I had brought a limited supply of beads and couldn’t seem to think of anything to do with them.  As I looked around at the others, busily playing with their supplies and turning them into lovely objects, I realized that the panicky feeling I had was…performance anxiety.

What if I couldn’t muster enough creativity to craft?

I kept up a steady stream of chatter, telling stories like it was my job.  I hoped no one would notice me floundering.  But let’s face it, we were all sitting at the same table.  There was no hiding my lack of ideas.  Luckily, Sue took pity on me.  She offered to let me steal her supplies and to teach me the appropriate wire wrapping technique to make earrings.  And I happily spent the day putting together multiple pairs, to end up with only one pair worth keeping and wearing.

From most perspectives, the day was a success.  We enjoyed one another’s company immensely, laughed continuously, and everyone left with something to “show” for the time they had devoted.  We also agreed that it had been so wonderful to work with others, rather than hunched over solitary work tables at home, that we needed to do it again.  However, I wasn’t content.  After all, I had dubbed the event “Art Day”, and even though I love those earrings (I’m actually wearing them right now), they seemed too diminutive to live up to the ART in the day’s billing.

Back home, in my drafty little house, I conceived an idea which has enriched the Art Day experience for all involved.  Between Art Days, in order to maintain interest and motivation, what if we had challenge projects to complete and bring to the next Art Day gathering?  I set about creating packets of interesting items: glass pieces, shell discs, starburst sequins, mica flakes, gauze leaves.  Each Art Day participant received a packet with the following instructions:

Everyone agreed to participate in the challenge.  I was excited because the challenge offered me the opportunity to play around at home, away from the eyes of others more experienced in the visual arts, where I could be less performance focused, and more process oriented.  I had a great idea for my piece and set to work with a will. 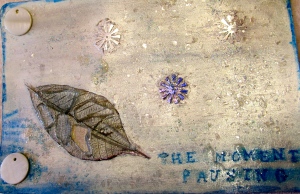 Ok, I thought, there’s time.  I can try this again.  Well, I didn’t completely hate the second attempt.  But I wasn’t in love with it, either.

Astute observers will note that in both of these attempts, I included words.  I didn’t seem capable of creating a piece that would convey its message in a purely visual form.  And while I like art which uses text elements, I felt that in my case, part of the inner urge to create these pieces was to move away from my wordy comfort zone.  So, I decided, with only a few days until we were to meet at Steph’s house for Art Day Part Deux, to go for attempt #3.